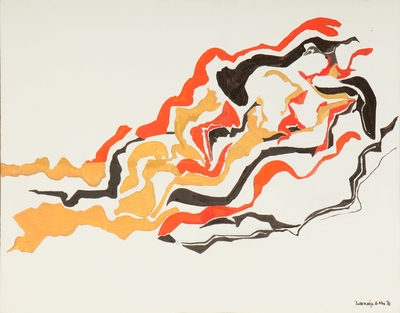 Costas Joachim was born in Bellapais, Kyrenia, Cyprus. He studied at Bath Academy of Art, Corsham, Τhe University of Bristol, UK specializing in painting, sculpture, visual perception and art education. In 1966 Joachim established Bellapais Studio in Bellapais, where he worked and exhibited until 1974 when he was forced to leave after the Turkish Invasion. In 1975 he graduated from The School of Fine Arts, Athens, and in 1981 was awarded the Post Graduate Diploma in painting, aesthetics and history of art, from the Chelsea College of Art, London. Joachim staged more than twenty solo exhibitions in Cyprus, Greece, Germany and the United Kingdom. He also participated in a number of important group exhibitions. Just to mention a few: 1968 The Venice Biennale, 1969 The Sao Paolo Biennale, 1970 ‘Cyprus Contemporary Art’ at the Commonwealth Institute, London, 1971 The Triennale India, 1971 Jeunes Artistes Biiennale, Paris, 1976 ‘Contemporary Cypriot Art’ Zappeion Athens, 1979 Demitria, Salonica, 2002 ‘Cypriot Artists from 60-74’ Municipal Arts Centre, Nicosia, 2009 Florence Biennale. His work can be seen at: The State Gallery of Contemporary Cypriot Art and in several private collections in Greece, Cyprus, Germany and the United Kingdom. Chrysanthos Christou, art historian, comments on this series of paintings by Joachim: The defining elements of the painting of Joachim are at times the static and at times the flowing kinetic shapes with constant emphasis on linear depiction. Moreover, there is the dynamism of space, an ascetic presence of colour, free organization and importance of the calligraphic elements. In the most substantial of his attempts he has departed from a specific visual reality, in that he translates forms freely into linear depictions, energizing the space with expressionistic characteristics.
Susan KERR