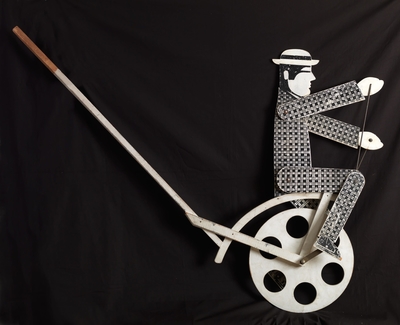 Gaitis was born in Athens in 1923. In 1935 he enrolled at The School of Fine Arts, Athens, where he studied under Constantinos Parthenis. He presented his first solo exhibition in 1945 at his home and studio in Athens. His second was held at Parnassus gallery in 1947, which caused a stir and received various negative reviews, because of the work’s audacity in that his forms included surrealist, cubist and abstract elements. Gaitis was a founding member of Alekos Kondopoulos’ group Akraioi (1949), with whom he participated in the Sao Paulo Biennale in 1953. In 1954 he moved to Paris, on a scholarship funded by The Holy Foundation of Evaggelistria of Tinos allowing him to study at École des Beaux-Arts and Académie de la Grande Chaumière. In Paris he became familiar with modern trends and mixed in European art circles. In 1959, in Rome, he joined the group Gruppo Sigma, alongside Caniaris, Kessanlis, Kontos and Tsoklis. Throughout his career, he actively exhibited internationally and in Greece, to where he returned permanently in 1974. He died in 1984 in Athens, a week after the opening of his major exhibition at The Athens National Art Gallery.
Gaitis wood construction