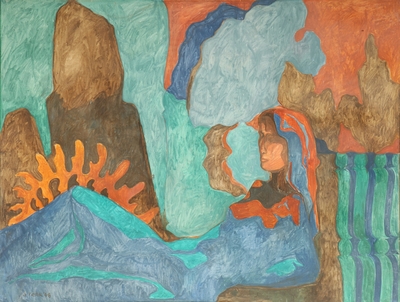 Reclining Figure I
oil on canvas

Susan Kerr was born in London and studied painting, art history and graphics at The Bath Academy of Arts and continued her studies at Leicester University to study Art Education. In 1966 Kerr married Costas Joachim and moved to Cyprus where she settled in Bellapais, the birth place of Joachim. Together they established their working art studio and gallery until forced to leave in 1974. Between 1974 and 1977 she lived in London and Athens, and then returned to Nicosia, Cyprus. In 1984 together with her husband they established the new Bellapais Studio where they work until today. Susan Kerr taught English from 1975 and Visual Arts from 1987 at the American International School in Cyprus until she retired in 2008. She has also written and designed exhibition catalogues for Bellapais Studio and Gallery, as well as the book Dialogue with the Surface’ on Costas Joachim’s life and art. ‘ Since 2008, Susan Kerr has been working solely on painting. She held a number of solo exhibitions in Cyprus, and group exhibitions, such as The International Biennale of Contemporary Art Florence in 2007 and 2009, Art & Integration, Italy in 2010 and 2012, Creative Energy, in 2010 in Ferrara and 2011 in Bologna, Spirit of Art, London in 2011 and Spirit of Art, Vienna in 2014. Reclining Figure I was exhibited at Kerr’s first solo exhibition at the Cyprus Hilton in 1969. Dr. Constantinos Spyridakis, Minister of Education, comments on this series of paintings: ‘From the subdued tones and colours of a misty northern atmosphere, it is very obvious that Susan Kerr has gradually changed towards a clear dream of pure colours and eventually arrived at a definite and obvious unity. This exhibition presents this impression: how an English painter reacts to a new environment in which she lives and how the reaction is depicted and reflected in her canvases. Amongst them, one can distinguish details of life in Cyprus, the plants that beautify people’s homes, the detail of the balustrade, one archway, one column. One can experience in her paintings the interplay at that particular moment when the previous elements relate and weave themselves with the new to produce one substantial unity’.
Elias ADJITIRIS