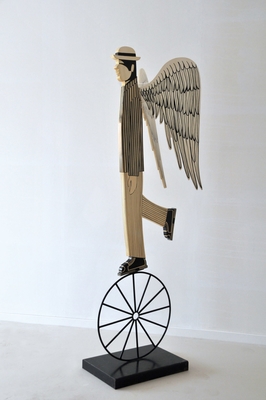 
Yannis Gaitis, Catalogue Raisonne, Angers, 2003, page 319, image 1372, illustrated
We are thankful to Loretta Gaitis-Charrat for confirming the authenticity of this work.

In the early ‘60s few figurative images appear in his abstract gestural painting. Gradually however, he shaped his most distinct feature, the little man (anthropaki), the trademark of his new, entirely personal, neo-figurative painting, which made him well-known internationally. His identical little men (anthropakia) symbolise middle class propriety and alienation. This dominated his work from that point on, in several variations: often as wooden constructions, utilitarian applications or artistic happenings. The painter’s little man starred in the film Gaitis le Baladin (1971) in collaboration with director Serge Bergon. Yannis Gaitis’ work gained enormous popularity (in spite of his critics), thanks to his peculiar artistic idiom, his outstanding productivity and his persistence to bring his art into contact with the broadest possible social strata in every way imaginable. His works are found in many public and private collections in Greece and abroad, notably: The National Gallery, Athens, The Athens Municipal Gallery and The Rhodes Municipal Gallery.
Susan KERR