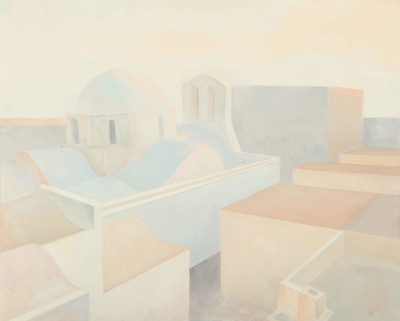 Zoe Zenghelis was born in Athens, Greece. She studied painting and drawing with Orestis Kanelis. In the 1960s she left Greece to study stage design and painting at The Regent Street Polytechnic, London. It was a period when many art and architecture students had tutors strongly influenced by the Modernist Movement. Ultimately she and her fellow graduates went on to fly the flag of Modernism themselves, now absorbed seamlessly into the contemporary art and design of the day. Zoe started her painting career as a founding member of OMA (Office for Metropolitan Architecture) and painted for presentations, exhibitions and publications. Gradually she focused more on her own paintings and less on architectural presentations, so that in the 1980s she became known as a painter in her own right, exhibiting in the UK, Europe and the USA. From 1982 to 1993, in partnership with Madelon Vriesendorp, she ran the colour workshop at The Architectural Association, London. Zoe has also taught at: UCLA, Los Angeles, California, UCA CAL, State Polytechnic, Pomona, USA, Plymouth Polytechnic , Brighton Polytechnic and Edinburgh University.
Dimitris MYTARAS