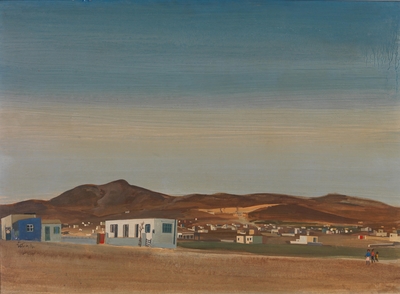 Vassiliou studied at The School of Fine Art, Athens in the workshops of Alexandros Kaloudis and Nikolaos Lytras. In 1929, Vassiliou held his first solo exhibition, and in 1930 was awarded The Benaki Prize for his design of Saint Dionysios Church in Kolonaki, Athens. He represented Greece at The Venice Biennale in 1934 and 1964, in The Alexandria Biennale in 1957, and at The Sao Paolo Biennale in 1959. In 1955 he designed and painted the interior of Saint Konstantinos Orthodox church of Detroit. In 1960 his autobiographical work, Lights & Shadows, was exhibited in The Guggenheim Museum and was the recipient of a Guggenheim Prize for Greece. In 1975 and 1983 his work was presented in retrospective exhibitions in The National Gallery, Greece. Vassiliou was a member of an important community of Greek artists in the mid-20th century, and was known as one of the first Greek pop-artists. His work can be found in The National Gallery of Greece, The Municipal Gallery of Athens, The Averoff Gallery, The Leventis Gallery, The National Bank of Greece and many other public and private collections.
Zoe ZENGHELIS