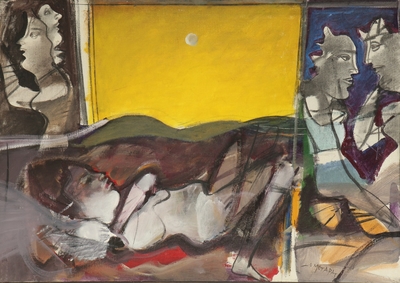 Dimitris Mytaras was born in Chalkida in 1934. He studied painting at The School of Fine Art, Athens between 1953 and 1957 in the workshop of Yannis Moralis. He continued his studies in Paris at the Ecole des Arts Decoratifs where he studied stage design between 1961 and 1964. In 1975 he became a regular painting professor at The School of Fine Art, Athens. Mytaras started his career with drawing and then proceeded with the application of colour. The vivid use of colour and the dynamism of design, are among the most striking and prominent features in his works. His work is mainly inspired by the human figure, and a combination of naturalism and expressionism. From the 1960s onward, Mytaras moved towards Critical Realism while from 1975 an Expressionistic approach became more and more marked in his output. He has exhibited his work in many solo exhibitions both in Greece and abroad, and participated in more than 30 international group shows, including The 1972 Venice Biennale. Mytaras work can be found in The National Gallery of Greece, The Municipal Gallery of Athens, The Macedonian Museum of Modern Art, The National Bank of Greece, and many other public and private collections.
Costas ALEXIOU