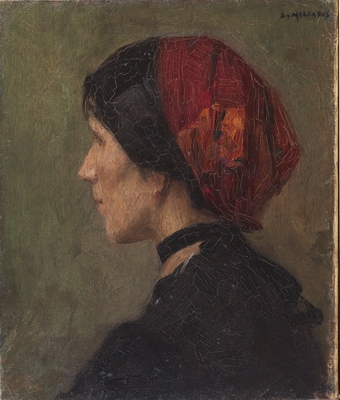 Stelios Miliades was born on the island of Chios in 1881. He was taught his first lessons in painting as a student of Constantinos Volanakis and later enrolled at The School of Fine Arts, Athens, leaving in 1897 at the age of sixteen to move to Munich. There he studied at The Royal Academy of Fine Arts, under Nicholaos Gysis and L. von Lofftz. In 1903 he returned to Greece and then moved to Paris, where he continued his studies at the workshop of F. Cormon and the School of F. Sabate. He lived in France for fifteen years briefly staying in Greece between 1915 and 1920, to where he finally returned in 1931. Miliades' worked mainly on portraiture and landscape, the second being a theme that fascinated him all his life. Interestingly his work during his time in France has an impressionist feel, using bright colour, whereas the works painted in Greece are more clear, solid and consistent. He also painted seascapes and still-life. Miliades was a post-impressionist. The movement was still very prominent in Paris in the first decades of the twentieth century. In 1983 a large posthumous retrospective exhibition was held at The National Gallery of Greece. His work can be found in: The National Gallery of Greece, The Municipal Gallery of Athens, The Municipal Gallery of Rhodes, The Leventis Gallery, The Averoff Gallery, The Bank of Greece and many other public and private collections.
Oumbertos ARGYROS