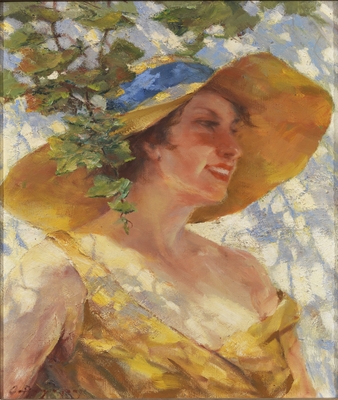 Under the sun
oil on canvas

Oumbertos Argyros was born in Kavala. In 1900 he enrolled at The School of Fine Arts, Athens, where he studied painting under Nikiforos Lytras and Georgios Roilos. He graduated four years later as an exceptional student. In 1906 Argyros continued his studies in Munich at The Royal Academy of Fine Arts. Two years later, a grant given to him by the Averoff Foundation, meant he could stay in the Bavarian Capital. There he was taught by M. Seitz and later by L. von Lofftz and K. von Marr. During this time, because his scholarship criteria included studying iconography of important religious landmarks, he visited Mount Athos, Jerusalem, Egypt and a number of European cities. Argyros lived in Munich for a total of twenty-three years, returning to Greece in 1929. That year he was appointed to be a professor of The School of Fine Arts, Athens. He taught there until 1953. During The Second World War he was appointed as the official state artist to record battles of the Greek-Italian War. These works can be seen today in The National War Museum of Greece. During his stay in Munich Argyros participated on numerous occasions at the prestigious Glaspalast Exhibition. After his return to Greece he exhibited in the 1934 and 1936 Venice Biennale. His works are found in many public and private collections, notably: The National Gallery, Athens, The Athens Municipal Gallery, The Leventis Gallery, The Averoff Gallery, The National War Museum of Greece and The National Bank of Greece.
Alexis AKRITHAKIS