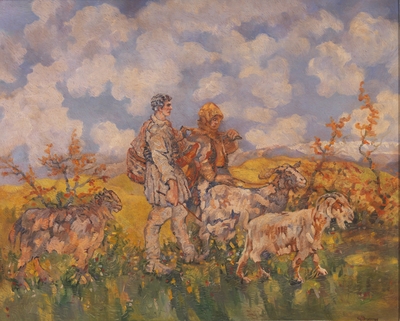 Farmers and flock
oil on canvas

Thomopoulos was born in Patra, Greece and studied in Italy. He taught at The School of Fine Art, Athens for many years and served as director of the school in the period 1948 - 1949. In 1945 he was elected a member of The Academy of Athens and in 1962 he was the president of the same institution. In 1929 he painted 16 oil paintings on behalf of The Municipality of Patras, that were exhibited in the hall of the city council and mayor's office. Another important work by Thomopoulos are the frescoes of The Cathedral of the Annunciation in Patras. In 1996, The Municipality of Patras honoured him with a large posthumous retrospective exhibition at The National Gallery. Thomopoulos work moves between academicism and early Greek impressionism. The majority of his paintings are inspired by nature such as the work presented here. His work can be seen in the collections of: The National Gallery, Greece, Municipality of Athens, The Municipality of Patras and in a large number of public and private collections in Greece and abroad.
Stefanos DASKALAKIS