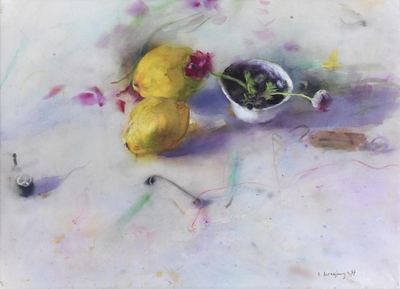 Stefanos Daskalakis was born in Piraeus in 1952. He attended The School of Fine Arts, Athens from 1970 to 1974, studying in the workshop of Giorgos Mavroidis. He continued his studies in Lyon and Paris from 1978 to 1981 and then at Leonardo Cremolini’s studio at the École Nationale Superieure des Beaux-Arts. In 1982 he returned to Athens. Together with Irini Iliopoulou, Giorgos Rorris, Edouard Sacaillan and Maria Filipoulou he set up an informal artistic team endorsing the ‘return to paintability’. Additionally he was an assistant and model for Yannis Tsarouchis for nine years until Tsarouchis’s death in 1989. Daskalakis’ themes consist of still life, interiors, the human figure and portraiture. His work’s beauty captures austere, almost photographic design together with a warm, sensitive emphasis on earthly subjects and shadows. His work can be found in The National Gallery of Greece, The Frissiras Museum, The Kouvoutsakis Art Institute, The National Bank of Greece and many other public and private collections
Oumbertos ARGYROS