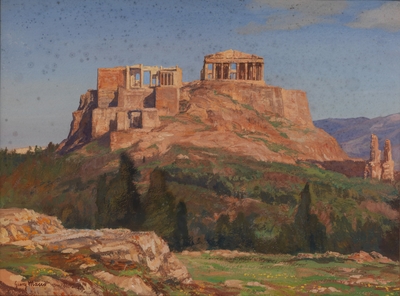 A view of the Acropolis I
gouache on card

Macco was born in Aachen, Germany in 1863 and studied at The Art Academy in Dusseldorf between 1880 and 1887 under Eugen Gustav Dückerstieg and Johann Peter Theodor Janssen. He first painted alpine landscapes, but his real inspiration came from his numerous travels to the Orient. He visited Athens, Constantinople, Jerusalem Cairo, Mecca and other places in the Middle East, where he found some excellent motifs for his paintings making him one of the most sought after German Oriental painters of his generation. His works can be found in museums and private collections world-wide such as in The Kunstmuseum, Düsseldorf, Suermondt-Ludwig-Museum, Aachen, Rudolfinum, Prague and The Alpine Museum, Munich. His exceptional skills in selecting the view, the high academic standard of painting and the romantic sense of light render A view of the Acropolis an exceptional work by Macco portraying one of the most important monuments of mankind.
Alexis AKRITHAKIS