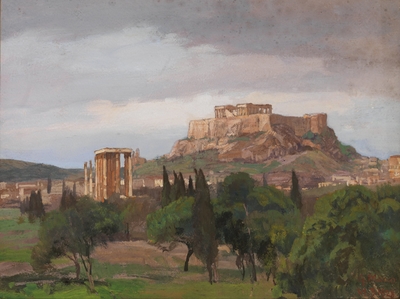 A view of the Acropolis II
gouache on card

In the 19th Century an unprecedented number of talented artists devoted themselves to travelling and drawing the ancient monuments of countries such as Greece, Italy, Egypt and so on, where they transformed the tradition of depicting idealised scenes (prized by their predecessors) and instead drew directly from their source of inspiration.

The Grand Tour, as it is referred to, primarily valued the cultural legacy of classical antiquity and the Renaissance.

From the 17th century onwards a tour to such places was considered essential for budding young artists in order to understand proper painting and sculpture techniques.

In addition, it provided the only opportunity to view specific works of art, and possibly the only chance to hear certain music. A grand tour could last from several months to several years.

A view of the Acropolis II offered here is a work painted by a Macco on such a European tour.
Alexis AKRITHAKIS