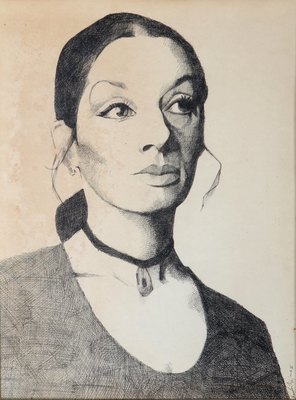 Demos Skoulakis was born in 1939 in Athens. He studied for a short time near Fotis Kontoglou then Spyros Papaloukas. In 1957 he went to Paris where he became friends with Thanos Tsingos and met many of the Greek artists who lived there at the time. A year later he returned to Athens. In 1961 he enrolled at The School of Fine Art, Athens and was taught by Mavroides and Moralis while he attended courses in set design and decoration of the Vassiliadis workshop. Between 1969 and 1974 he lived between Paris, London and Berlin. During the period 1959-1984, along with painting and caricature, Skoulakis worked on set design and illustration, he worked for the magazine ‘Art Review’ and ‘Foundation’. From 1984 onwards he was dedicated completely to painting. His work has photo-realistic attention to detail, clean colours and strong symbolic meaning. Strong light/shadow contrast is another trademark of Skoulakis as is the isolation of his subject matter from its everyday surroundings. He has presented his work in many solo and group exhibitions in Greece and internationally. Numerous public and private collections include his works.
Victor IOANNIDES