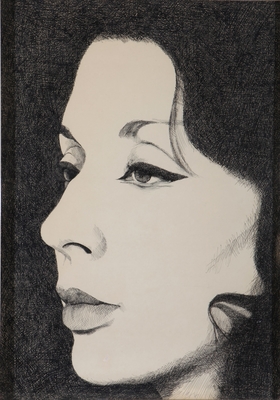 Monica Vassiliou, 1936-2011 Monica Vassiliou was born in Greece, on the island of Lesvos. She studied Drama at the Ostrovski Institute in the former Soviet Union and later specialized in children’s theatre at the Centre d’ Éducation Populaire in Paris. Her stage career includes performances in Moscow, London, Athens and Nicosia. In London she appeared in a BBC production of Nicos Kazantzakis’s controversial novel “Christ Re-crucified” as the widow, a role previously played by Melina Mercouri in the Jules Dassin 1957 film version. She was also the first actress to appear naked on the Greek stage as Lady Chatterley in a theatrical adaptation of D. H. Lawrence’s novel “Lady Chatterley’s Lover”. Monica Vassiliou also starred in a number of television series. Her family participated intensely in Cypriot politics: her brother George Vassiliou being the President of the Republic of Cyprus from 1988 to 1993. Vassiliou was also a political activist. She protested alongside Cypriot women on the Acropolis, hanging banners with slogans in many different languages decrying the Turkish occupation of northern Cyprus.
Demos SKOULAKIS