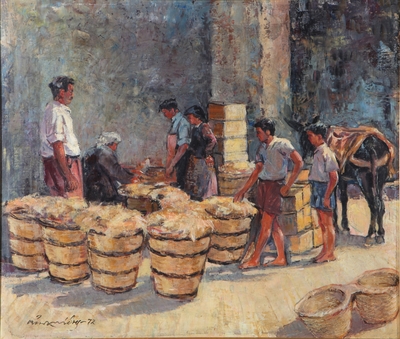 The old Market
oil on board

Victor Ioannides was born in Limassol in 1903. His father, Neoklis Ioannides was a wine producer and merchant. He was also an active and progressive individual, being one of the four founders of Limassol’s Popular Co-operative Bank which subsequently became Laiki Group. His mother was Eleni Skyrianides.

After attending The Limassol Gymnasium for four years, he transferred to The American Academy in Larnaka until the end of his schooling. His talent in painting and music were evident early on.

In 1923, against his father’s wish, he enrolled at The School of Fine Arts, Athens, studying under George Iacovides, Spyros Vikatos, Nicolaos Lytras, George Roilos, and Demetris Geraniotis. There, he became close friends with the likes of Nikos Zongolopoulos and Spyros Vasileiou.

Whilst a student, he worked as a newspaper cartoonist, from 1923 to 1924 for Eleftheros Typos, and from 1925 to 1929 for Elliniki. Additionally he was a regular illustrator for The Hellenic Encyclopedia.

In 1930 he returned to Cyprus. From 1931-1933 he taught art at The Limassol Private School. In 1936 he co-founded ‘L-Atelier’ with George Fasouliotis, the first professional workshop specialising in decoration and advertising in Cyprus.

That same year he was appointed editor-in-chief and cartoonist for the satirical newspaper ‘Gelio’. A small group of intellectuals was formed around ‘Gelio’ and ‘L-Atelier’ including prominent personalities of the day such as composer Solon Michaelides, painter Vasilis Vryonides, journalist Demetrios Demetriades, and Lefkios Zenon.

With the onset of World War II and its repercussions on the island’s economy, business for ‘Atelier’ slowed down. Hence, in 1942, Ioannides accepted an art teaching position at The Larnaka Lyceum, where he remained until 1948. He continued to take up various secondary education teaching positions in his hometown until his retirement in 1966.

Despite the fact that painting was his focal point, his first one man show, wasn’t realised until 1951. This was partly due to the public’s lack of education in art. Yet the main reason for the delay was because of the time taken to develop his artistry, where he carried out a great deal of research in his use of materials.

After his first exhibition, he held another twenty one shows in Limassol and elsewhere in Cyprus, all received with great enthusiasm by the public.
Eleni ZERVA