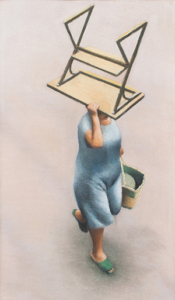 Christine Watson was born in Southsea, Hants in 1958.

She is a graduate of the Winchester School of Art and the Slade School of Fine Art, University of London. A recipient of several awards and distinctions since the beginning of her career, she spent some time at the British School in Rome in 1995 (EA Abbey Award in Painting), where she had the chance to get closely acquainted with the Mediterranean landscape and Classical culture.

Her frequent trips to the South of Europe serve to develop her taste for the Southern light, the monumentality of Classical sculpture and the mystic frugality of local architecture.

Over the last few years Christine Watson has forged a distinct repertoire of subject matter, technical, and stylistic qualities, personal enough to reserve a place for her paintings separate from various short-live trends of the modern art scene. In her forthcoming show at Gallery K this October, Watson continues her chosen subject matter, images of women, while expanding her technical range.

Large-scale depictions of weather-beaten, ageing women from Southern Europe, her canvasses present their anonymous subjects in their everyday reality, engaged in daily mundane tasks, such as washing, knitting, sewing, or simply resting. Yet, there is nothing mundane about Watson’s imagery of femininity. Carefully avoiding the viewers investigating gaze – usually painted from behind, head looking away or hidden behind straw hats and head covers- her big female figures balance their anonymity with the monumentality of their postures and dignity of expression. Elevating the trivial onto the realm of the heroic, Watson’s paintings seem to re-constitute visually the tales of female labour and indeed find their own enclave in the long history of female imagery.

The feminist concern is only the subtext, however. Though pre-occupied with feminist issues as a former member of the Xantippe artist’s collective, Watson also takes sheer pleasure in stretching the formal and technical aspects of her work. Her paintings linger between the real and the surreal to finally find their place in the realm of magical realism. Projecting her figures onto flatly surfaced and brightly coloured backgrounds, Watson poises the figurative with the abstract.
Strong chiaroscuros contrasting exact lighting to abstract shading add on this effect by creating a dramatic, almost metaphysical feeling about the works. Monumental, enigmatic, and powerful, Watson’s imagery is rich in meanings and technical qualities, thereby compensating both intellect and senses.