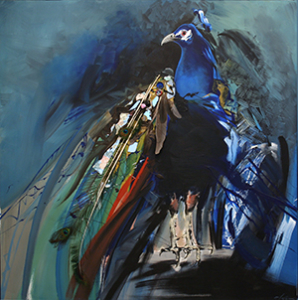 Apostolos Yayannos was born in Tripolis, Peloponese and currently lives and works in Athens.

Initially a graphic artist, he did his debut as a painter in 1974 with great success. Between 1965 and 1967 he studied Applied Arts at the A.T.I. with A. Tassos, Helias Decoulatos and Dimitris Mytaras. Later between 1971 and 1973 he studied painting with Helias Decoulatos.

Yayannos has always been pursuing innovation and diversity of artistic expression, following the progressive tendencies of post-war Modernism. His work re-considers the development of traditional subject matter in painting, landscapes and still life animals and symbols. Being aware of the contemporary artistic vocabulary he makes statements pointing towards a new and challenging dimension. Whether it is abstract landscape painting that epitomises and interprets nature through a wide and thick brushstroke, or still-lives and animal painting, the theme becomes a symbolic pretext.

For more than forty years, this Athenian painter has produced an impressive body of work. Initially a graphic designer, he turned to painting, becoming an artist of considerable international repute.

He always pursues innovation and diversity of artistic expression, following the progressive tendencies of post-war Modernism. His work challenges the development of traditional subject matter in the entire genre, within the terms of his own a vocabulary.

During the last decade birds and plants have been his predominant theme, echoing his concerns about their loss of habitat. His exotic floral world and avian jungles whispered Hitchcock’s revenge, with powerful references to Ethon, the eagle that tormented Prometheus.

In 2003 he published the novel ‘Good Bye Forever’.

His works can be found in numerous public and private collections in Greece and abroad, notably: The National Gallery, Athens, The Vorres Museum and The Frysiras Museum of Art.