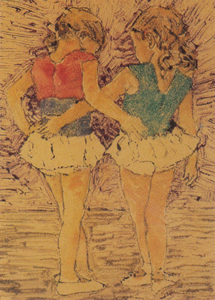 Vasilis Vrionides was born in Limassol in 1883.

As a young man with love for art, he managed to persuade his wealthy father to let him study music in Venice around 1900. At the end the art that attracted him the most was drawing. He attended classes at the Academy of Fine Arts, without finishing his studies. He remained in Venice until 1909.

Whilst he was alive, he didn’t exhibit neither dispose his work to the public.

Vasilis Vrionides was influenced from modern drawing trends, which he came close in Paris. He also had many painters as friends who were well known at that time. His work was exhibited in a posthumous exhibition in 1962 at the Municipal Gallery in Limassol.

His work can be found at the State Gallery of Contemporary Cypriot Art, the Municipal Gallery of Limassol and in private collections.