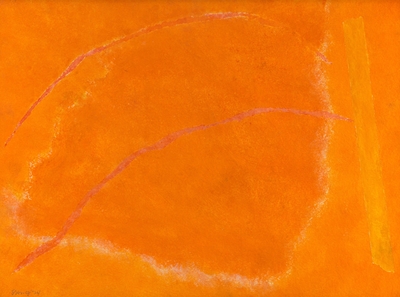 Stamos was born on Manhattan's Lower East Side to Greek immigrant parents, his mother was from Sparta, and his father was raised in Lefkada. As a teenager, he won a scholarship to study at The American Artists School where he studied sculpture with Simon Kennedy and Joseph Konzal. In 1943, when Stamos was 21, prominent dealer Betty Parsons held a solo exhibition for Stamos at her gallery: Wakefield Gallery and Bookshop. By the mid 1940s, he was becoming well established. He exhibited at The Whitney Museum annually from 1945 to 1951, The Carnegie Institute, The Art Institute of Chicago in 1947, and The Museum of Modern Art in 1948. The Museum of Modern art purchased Stamos’ Sounds in the Rock in 1946. During the late 1940s Stamos became a member of The Irascible Eighteen, a group of abstract painters who contested The Metropolitan Museum of Art’s policy towards American painting of the 1940s. Members of the group are considered the 'first generation' of abstract expressionists and include: Willem de Kooning, Jackson Pollock and Mark Rothko. They were the first American artists that consciously made a break with The School of Paris in pursuing their own agenda for a new approach to painting. Stamos nurtured his deep identification with ancient myths and Classical Greek philosophy, and this spirit was always prevalent in his work. Writer Dore Ashton observed that he responded visually and emotionally to the light and colour of specific places, these included: The North Fork of Long Island, the island of Lefkada in The Ionian Sea (where he spent his final years), as well as renowned sites such as Jerusalem and Delphi. His work is in numerous public and private collections worldwide, including: The Metropolitan Museum of Art, New York, The Museum of Modern Art, New York and The Whitney Museum of American Art, New York.
Angelos GIALLINA watercolour