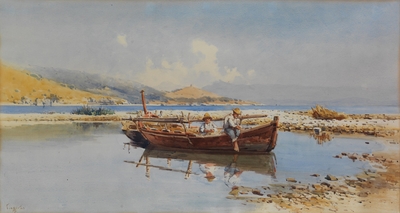 Angelos Giallina was born on the island of Corfu and was of a noble family that had close ties with the Venetian Greek minority. He studied in Naples, Venice and Rome between 1875 and 1878. In 1878 he returned and settled in Corfu. Inspired by the scenic beauty of his birth place he worked exclusively in watercolour, a medium in which he excelled, creating works of unparalleled beauty. Giallina’s work is in the manner of Scuola di Posillipo of Naples. His style was greatly influential amongst his contemporaries, particularly at the start of the 20th century. Around 1886 he met British ambassador: Ford, who became a great patron of his work. Ford commissioned seven albums with scenes of Greece, Venice and Spain. He also organised exhibitions for Giallina in Athens, London and Spain and introduced him to European royal circles. Later in life Giallina exhibited in Berlin and Paris. Giallina’s clients included the Royal families of Britain, Austria and Germany as well many European aristocratic families. Between 1907 and 1908 Giallina worked on frescos in the Achilleion, the summer residence of Elisabeth of Bavaria, also known as Sissy. His works are found in many private and public collections, notably: The National Gallery, Athens, The Athens Municipal Gallery, The Corfu Municipal Gallery, The Leventis Gallery, Nicosia, The Koutlides Collection and The Averoff Gallery.
AKRITHAKIS wood construction