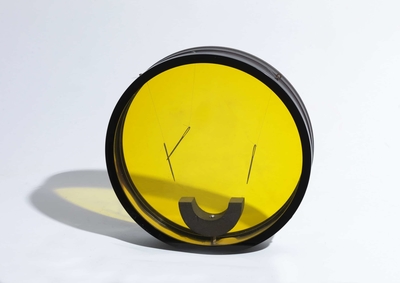 Born in Greece, Takis settled in Paris in 1954. Influenced by the invention of the radar and the technological landscape of the station of Calais, Takis constructed his first Signals in 1955. Soon, these signals became kinetic and flexible, resembling electric aerials and were shown at the first 'International Exhibition of the Plastic Arts' at the Musée d'Art Moderne de la Ville de Paris, 1956. In 1966 Takis worked in London and employed 'Unlimited', Bath to produce his signals. Takis continued to make signals throughout his career. Takis is a leader of the Kinetic movement and a precursor of Street Art Performance. Mainly working with light and magnetic energy, he gave form to the series of 'Signals', 'Music Sculptures' and 'Tele- and Hydro-Magnetic Sculptures'.
Georgios GOLFINOS