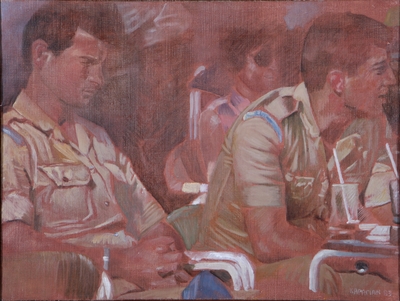 Andreas Karayian was born in 1943 in Nicosia. He initially studied Medicine, graduating in 1967 from the Medical School, University of Athens. The following year he enrolled at the Camberwell School of Art, London where he studied painting. He graduated in 1972 and then studied etching for a year at the Central School of Art. He then moved to Stuttgart where he furthered his studies at the Staatliche Academie der bildenden Kunste, graduating in 1975. Karayian has established himself as of one of the best Cypriot figurative painters, portraying everyday life centred on the male figure: his main subject matter. His compositions have a poetic feeling that is expressed through a selective colour palette and sensitive light graduation. Works such as Two soldiers are carefully balanced and executed with great skill. Karayian has presented his work in many group and solo exhibitions in Greece, Cyprus, Germany and Egypt. Additionally he represented Cyprus at the 2001 Venice Biennale. His work can be found in many public and private collections in Cyprus. Notably at The State Gallery of Contemporary Cypriot Art, The Nicosia Municipality Collection, The Bank of Cyprus Cultural Centre and The Central Bank of Cyprus Art Collection.
Takis VASSILAKIS