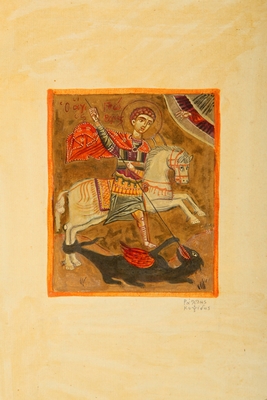 St George and the dragon
oil on handmade paper

Rallis Kopsidis was born on the Island of Limnos. In 1949 he enrolled at The School of Fine Art, Athens. However he abandoned his studies in the fourth year and continued studying under Photis Kondoglou (1953-1959), who he later collaborated with in executing church frescos.

He worked on an important number of church fresco commissions in Greece but also abroad, such as for The Monastery of Chevetrogne in Belgium and The Patriarchal Center at Chambesy in Geneva.

Kopsidis has written and illustrated a large number of literary books. Κάστρο ηλιόκαστρο and Το τετράδιο του γυρισμού are based on childhood memories (of the 1930s and 1940s) from Limnos.

His work can be found in many public and private collections in Greece and Cyprus, notably at: The National Gallery, Athens, The Athens Municipality Collection and The Leventis Gallery, Nicosia.
SIKELIOTIS Giorgos