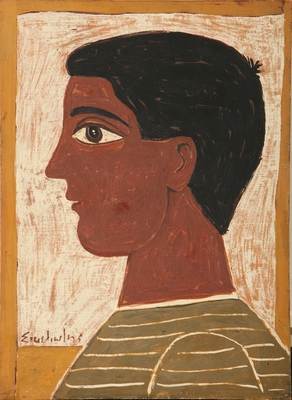 Portrait of a young boy
oil tempera on hardboard

Sikeliotis was born in Smyrna and in 1922 he moved to Athens. His early childhood memories recall the refugee camps in Kessariani, something that would greatly influence in his work, throughout his life.

In 1935 he enrolled at The School of Fine Arts, Athens, where he studied painting under Spyros Vikatos and Constantinos Parthenis.

His work is centred around the human figure, maternity, family, everyday life and religion. He works mainly in oil, in an expressionistic manner using thick brush strokes, usually in earthly colours.

Portrait of a young boy is a work that was created after the 1950s. Here one can see Sikeliotis’ signature artistic style. Two dimensional figures shaped out of flat planes, with emphatic eyes. This work is greatly influenced by the Byzantium and Fayum mummy portraits.