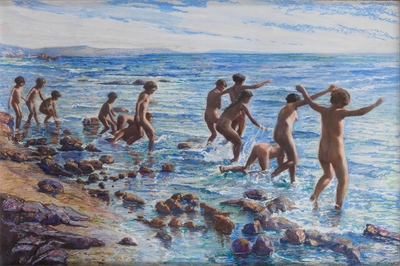 Zografos was born on the island of Evia in 1878. He studied painting at The School of Fine Arts, Athens and in 1902 visited Mount Athos where he studied orthodox hagiography at a monastery there. The following year he travelled to Russia where he studied contemporary Russian hagiography. On his return to Evia, two years later, he worked on both icons and cosmic art. Between 1911 and 1913 Zografos presented his work in Egypt and lectured there. In 1920 he moved to Sparta where he took up an art teaching position at a local school. He also studied the frescos in nearby Mystras. Later, in 1925, he taught at the Gymnasium of Kalabaka and studied the Meteora monasteries. Zografos travelled to the United States in 1927 where he taught History of Art and Byzantine Studies at the College of the City, New York. On his return to Athens, in 1933, he worked on frescos in the church of Agia Marina in the Thissio neighborhood, which he never finishes as he died two years later. Zografos has presented his work in a number of group and solo exhibitions in Greece. His works can be found in numerous public and private collections in Greece and abroad.
VOTSIS