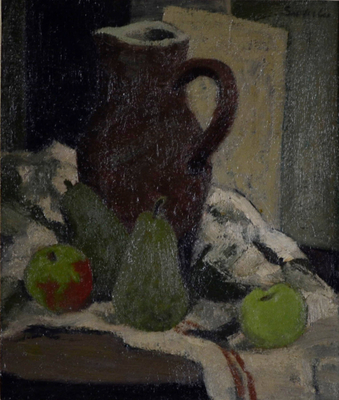 Jean Souverbie was a figurative painter of the French school, known for his compositions of still lifes and nudes. It was a meeting with Maurice Denis and Paul Sérusier in 1908 that influenced Souverbie to become an artist. Led by these two members of the Nabis group, Souverbie enrolled at the Académie Ranson in 1916, where he befriended Pierre Bonnard, Edouard Vuillard, and Félix Edouard Vallotton.In the 1920’s, Souverbie turned toward cubism after the discovery of Georges Braque’s work, but the decisive turning point was reached in 1925, when he exhibited along the Section d’or at the Vavin Raspail gallery and met Charles Gleizes, André Lhote and Pablo Picasso, who he deeply admired. This master, who had become a friend,deeply influenced Souverbie’s artistic conceptions. His nudes became more and more geometrical, their sculptural bodies echoed cubists icons of the Spanish painter.By the 1930’s Souverbie had become renowned. He turned to the realisation of monumental works (commissions) which made him famous around the world. In1937, he was amongst artists chosen to decorate the new Palais de Chaillot, built for the Universal Exhibition to replace the Palais du Trocadéro. During the second half of the 1940’s,he contributed to the decoration of 8 oceanliners, such as the Ile-de-France, the Liberté and the Laos, working with the likes of the Leleu. In 1946,Souverbie was appointed at the Académiedes Beaux Arts, while in 1948, the Ecoledes Beaux-Arts of Paris decided to open a studio of monumental painting especially for the artist, who became emeritus professor at this time. He then taught in the illustrious institution for more than 17 years and his students included, his son Romain Souverbie, Jean Le Merdy, Philippe Lejeune and Jean-Pierre Cassigneul.Souverbie is one of those artists who were considered, during their lifetimes, major figures of 20thcentury art. Today, his work is housed in public and private collections around the world, including in the Museum of Fine Arts, Boston, the Musée Rolin in Autun, the Staats galerie in Stuttgart, and the Petit Palais in Paris
Christoforos SAVVA