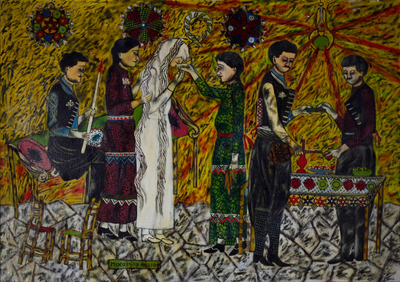 
Acquired from the artist by the present owner
private collection, Cyprus


Michael Chr. KKASHALOS, published by the Cultural Service of the Ministry of Education, Nicosia, 1976

This work, lot 48."Old marriage custom", depicts a theme well covered by Kashalos. In, Michael Chr. Kashalos’s “The hidden fascination of painting” three works are illustrated on pages 48-49 of this theme, depicting traditional Cypriot bridal rituals and events. In relation to those 3 works, the work currently offered for sale at our auction titled "Old marriage custom” portrays fewer figures creating a greater sense of intimacy around the holy, spiritual, and celebratory practice. Thereby making one immediately connect with the scene. The play on surface textures and patterns of the garments, furniture, interior surrounding and even the light, is more free, more imaginative, more rhythmic, and more artistically expressive than the 3 works referenced. It is in our view artistically the most mature work of the 4, and a truly exceptional work by Kashalos. Michael Kashalos is the most renowned naive artist of Cyprus. Kashalos (or Kkashalos as his name is sometimes spelled) depicted the customs, traditions and rural life of the island through his distinct style. He took up painting at a late stage in his life encouraged by the artist Adamantios Diamantis, who was impressed by his replication of antiquities. He held his first solo exhibition at Gallery Apofasis, run by Christoforos Savva. He later held a number of exhibitions in Cyprus and in 1969, having been selected by the Ministry of Education and Culture, he participated in the second Trienalle of Naive art in Bratislava where he won a prize. He also exhibited at the Commonwealth Institute in London, in 1970
Jean SOUVERBIE