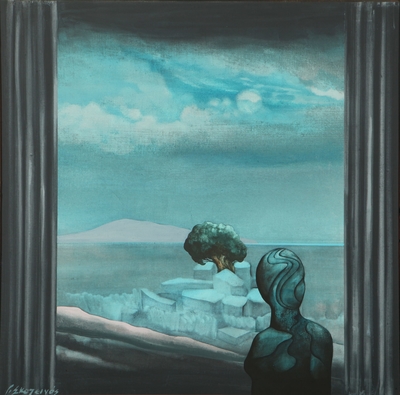 Giorgos Skoteinos studied drama between 1961 and 1964, at the Drama School of The National Theatre of Greece. At the same time he attended painting classes at The Athens School of Fine Arts. Between 1964 and1967 he continued his studies in New York, in cinematography and film editing at, the Visual Art and Movie Subscription Group. In works by Skoteinos such as Θεατρικο Γ, one can see a dialogue between realistic, abstract and surrealist elements. He transposes the rhythm of space into colour in a way that is characteristic of Skoteinos. Skoteinos has held many solo exhibitions in Cyprus and Greece. Additionally he has participated in many prestigious group exhibitions such as the 1967 Paris Biennale, the 1968 Alexandria Biennale, the 1968 Venice Biennale, the 1969 Sao Paolo Biennale and the 1969 and 1982 New Delhi Triennale. His work can be found in numerous public collections such as: The State Gallery of Contemporary Cypriot Art, The Bank of Cyprus Cultural Centre Foundation, The National Gallery of Greece, The Vorres Museum and The Leventis Gallery.
ilias LALAOUNIS brooch