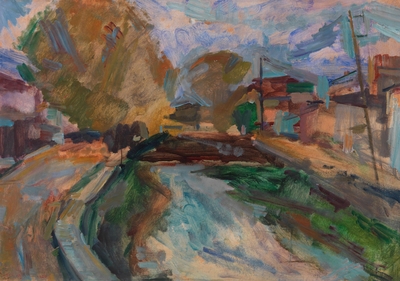 Loustas studied at The Athens School of Fine Art between 1953 and 1958, where he was taught by Yannis Moralis. He first received international acclaim in New York during the early 1960s where he lived and worked for several years. His solo and group exhibitions of this period include those at Saldinger, Firehouse, Salvo Art, Chase, Chevance and Paollilo galleries in New York, and Zaydler Gallery in London. His collaboration with Galerie Internationale on Madison Avenue in New York, where he held his first solo exhibition in 1972, continued for several years following his permanent return to Thessaloniki, Greece in the early 1980s. In 1991, The Municipality of Thessaloniki honoured his thirty-year artistic presence in the city with a major retrospective show at the Vafopoulio Cultural Centre. In 1993, with his series of ‘80+1 Portraits of Thessaloniki Personalities’, exhibited by The Municipal Gallery in Thessaloniki, he was honoured by the mayor and the state for his contribution to the Greek Arts and Letters. In 1999, the London art gallery of Paul Hawkins in Mayfair hosted a solo exhibition of his work. Further solo exhibitions organized by The Municipal Art Gallery of Thessaloniki included the series of still-lives entitled ‘Elgar 96’, inspired by his love for classical music and the violin in particular, a series of nude paintings entitled ‘Variations 2000’, and ‘Amelia 2004’, the last of which was a tribute to his three-year old grand-daughter Amelia. A significant part of the artist’s private collection was exhibited at The Vafopoulio Cultural Center in November 2012. Up to 2008, he had been on the board of directors of The Greek State Museum of Contemporary Art.
ilias LALAOUNIS brooch