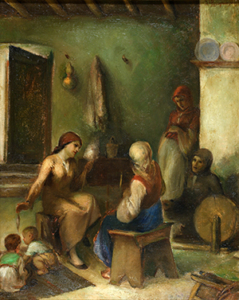 He studied at the School of Art in Athens from 1924 till 1932. His teachers were G. Iakovides, N. Lytras, Spyros Vikatos, Georgios Roilos and Pavlos Mathiopoulos. He excelled in all the exams through his studies.

After his graduation he returned to Cyprus for two years for the hagiography of a Church in the village of Agros, but in 1934 he returned to Athens and worked as a designer. During the Second World War he participated in the resistance against the Germans, by preserving a printing office in his room. In 1947, before the Civil War, he went back to Cyprus, where he died in 1981.

He worked on various icon-paintings for several churches in Cyprus. He also worked on painted portable icons combining the Italian and Byzantino type of icon painting. Moreover, he wrote art reviews in newspapers and magazines.

He showed his work in one-man exhibitions: in 1936 at Parnasso of Athens, in 1937 at Flerianou hall in Athens, at Costantia Hotel of Famagusta in 1953, at the Spiritual House of Nicosia, in 1972 at Cumberland Hotel in London.
In 1986, after his death, a retrospective exhibition of his work took place at Gloria Gallery in Nicosia.

Solomos Frangoulides participated in several group exhibitions: at Pancyprian Exhibition in 1932, at Panhellenic Exhibitions in 1933, 1940, 1941 at Salon d’ Art Moderne in Paris, 1961, at the “Exhibition of Cypriot Art” organized by the Socialism Institute in London and Edinburgh, at the Biennale d’ Art Sacra at Foggia of Italy.

He was awarded with the silver metal at the Biennale d’ Arte in Foggia in Italy.