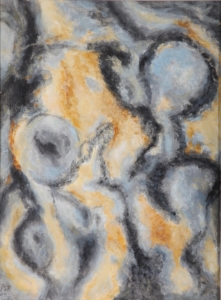 Takis Frangoudes was born in Limassol in 1900.

In 1918, after his graduation from the Greek Gymnasium of Limassol, he went to Athens to study at the Low School.
From 1920 and the next two years he attended painting lessons at the School of Art, having as a teacher G. Jakovides and at the Amateur School of Art with Vikentios Boccheciampe as a teacher.

After his studies he returned to Cyprus for four years and worked as a journalist. In 1928 he settles in Athens, where he works and creates. He had connections with intellectuals, traveled in several European countries, while he published art critics and studies on history of art. He died in Athens, 1978.

In 1969 Takis Frangoudes was awarded with the 1st Europa prize at the Lensbury Art Club in London.

His work can be found in the Collection of the State Gallery of Contemporary Cypriot Art in Nicosia and at the House of Cyprus in Athens.