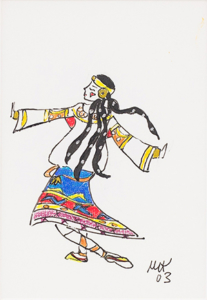 Gallery K, in 1997 was the first one to host a major exhibition in London of choreographic sketches by Millicent Hodson for the ballets she and Kenneth Archer had staged during the past decade. Sketches were included for ten productions that Hodson has created or reconstructed with Archer, focusing on the recovery of Vaslav Nijinsky’s ‘Le Sacre Du Printemps’ (1913), the original ballet to Igor Stravinsky’s score with designs by Nicholas Roerich.

The exhibition coincided with the 1997 publication of Hodson’s choreographic score for this reconstruction, ‘Nijinsky’s Crime Against Grace’.

Also included in the 1997 Gallery K exhibition were Hodson’s drawings for two other Nijinsky choreographies: ‘Jeux’ (Debussy/Bakst 1913) and ‘Till Eulenspiegel’ (Strauss/Edmont-Jones, 1916) as well as some for reconstructions of two early George Balanchine ballets: ‘La Chatte’ (Sauguet/Gabo, 1927) and ‘Cotillon’ (Chabrier/Berard, 1932). Published and unpublished sketches were shown as well from the reconstructed ‘Skating Rink’ (Honegger/Leger, 1922) with choreography after Jean Borlin’s innovative roller skating ballet in Cubist gear.

Four ballets for which Hodson and Archer created dance and design were represented in the exhibition: ‘Clytemnestra’ (score by Umberto Leonardo, 1995), ‘Ariadne and the Minotaur’ (score by Honegger, 1992), ‘Don Juan Quixote’ (score by Aulis Sallinen, 1996) made for Jose Martinez and Agnes Letestu of the Paris Opera with Nina Hyvarinen of the Finnish National Ballet and two solos for Beatriz Rodriguez of the Joffrey Ballet. The drawings of these ballets also stand as portraits of the performers.

Featured with Archer in ‘The Search for Nijinsky’s Rite of Spring’(WNET/BBC, 1989), and ‘Les printemps du Sacre’ (ARTE, 1993), millicent Hodson demonstrated in these films how she works through drawing to make or remake a ballet, coordinating music and movement with a succession of figures and groups. Drawing for her is a physical act akin to dance.