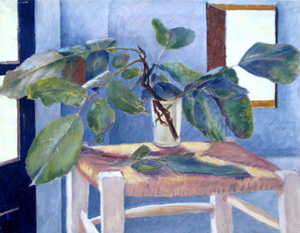 He was born in Nicosia, 1900. He attended the Pancyprian Gymnasium from 1912 to 1918. He studied art at Saint Martin’s School of Art in London from 1920 to 1921 and he afterwards continued his studies at Royal College of Art up to 1923, having as fellow-student Henry Moore and as coed Barbara Hepworth. He returned to Cyprus in 1923. He worked as art teacher at the Pancyprian Gymnasium from 1926 to 1962, while he developed vigorous social activity. He was a leading artist at the collection of popular works of art and for the creation of the Popular Art Museum. He acted as a director of the Museum since its creation in 1950. He died on the 28 of April, 1994.

Diamantis Adamantios art work has been presented in several individual exhibitions: at Ledra Palas Hotel in 1957, Nicosia; in 1962 at Zygos gallery, Athens; in 1964 at Socialist Institute of London and Edinburgh after an invitation from the institute. Individual exhibitions continued in 1975 at the Popular Art Museum, Nicosia; a presentation of “People of Cyprus” and of the series “Agonies” from Nicosia Municipality; the retroactive exhibition which was organized from the National Gallery of Greece; in 1977 at the Acropolis Gallery with organizer the Lions Club, Nicosia; in 1979 at the Mall Galleries organized by the English-Cypriot Society, London; in 1989 at the House of Cyprus, organized by the Cultural Services of the Ministry of Education and Culture, Athens and the same year at Argo Gallery, Nicosia. Finally, in 1994 a retrospective exhibition took place at the State Art Gallery of Nicosia.

He has participated in more than a few group exhibitions: at the “Art of the Commonwealth Today” of Commonwealth Institute of London in 1962; at “The Leader Makarios and the Struggle of the Cypriot People” in 1978, Nicosia; at the Demetria ’79 of Thessaloniki, called “Contemporary Cypriot Art” in 1979; at the Traveling “Exhibition of Contemporary Cypriot Painting” of 1980 and 1981 at Prague, Budapest, Zul-East Germany, Bucharest, Belgrade and Sofia. Moreover, he has taken part at the “Contemporary Cypriot Painting” exhibition in Paris International Diplomatic Academy in 1983; at Café de Paix called “Un instant de Paix” in 1985, Paris; and at Famagusta Gate called “25 Years of Cypriot Art” in 1985, Nicosia.

Diamantis Adamantios was honored with the First Drawing at Royal College of Art in 1923, London; the Athens Academy Award in 1976; the Excellence in Letters and Arts in 1993, Cyprus.