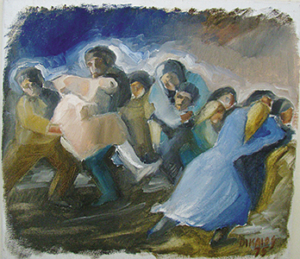 Charilaos Dikaios was born in Nicosia, 1912 and died in 2000. He graduated from the Pancyprian Gymnasium in 1931. He began his studies in 1937 at the School of Art in Paris, while he was attending painting lessons. His teachers were Tony Garnier and Auguste Perret. Due to the Second World War, he had to stop his studies for two years. He received his Diploma of Architecture in 1945 and he returned to Cyprus, where he worked as an architect and painter.

Charilaos Dikaios work can be found at the Presidential Palace of Nicosia; Embassies in Cyprus and abroad; at the National Bank of Greece; Chambers of Commerce in Greece; Embassy of Greece in Cyprus.