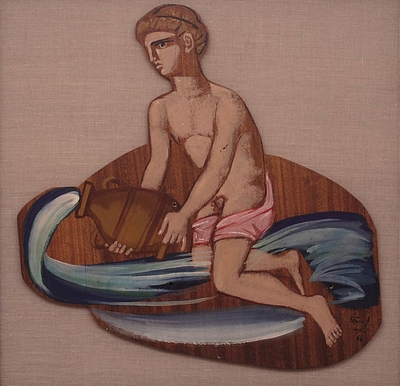 NoteThis is 1 of the 12 depictions of rivers commissioned to decorate a pavilion of the International Exhibition of Salonica. Spyros Vassiliou studied at The School of Fine Art, Athens in the workshops of Alexandros Kaloudis and Nikolaos Lytras. In 1929, Vassiliou held his first solo exhibition, and in 1930 was awarded The Benaki Prize for his design of Saint Dionysios Church in Kolonaki, Athens. He represented Greece at The Venice Biennale in 1934 and 1964, in The Alexandria Biennale in 1957, and at The Sao Paolo Biennale in 1959. In 1955 he designed and painted the interior of Saint Konstantinos Orthodox church of Detroit. In 1960 his autobiographical work, Lights & Shadows, was exhibited in The Guggenheim Museum and was the recipient of a Guggenheim Prize for Greece. In 1975 and 1983 his work was presented in retrospective exhibitions in The National Gallery, Greece. Spyros Vassiliou was a member of an important community of Greek artists in the mid-20th century, and was known as one of the first Greek pop-artists. One of the most popular Greek artists of the 20th century, a student of N. Lytras, a follower of Kontoglou and an admirer of the Flemish art, he painted subjects and faces of the familiar daily life in the midst of a changing Athens and Greece. The old house turning into a building site of the “modernized” Athens, the furniture of another era being destroyed, the old habits that were disappearing, all this fascination with the commonplace which recalls images of Flemish art, were figures scattered on his canvases. He is the artist who turned the visual ethography into a unique urban genre, incorporating the problems and worries of the modern era. This is the reason why he became “papa-Spyros”, the artist who recorded in our memory the fading images of the humble, the trivial every-day objects that were dying, as Greece was becoming western.
Salvador DALI