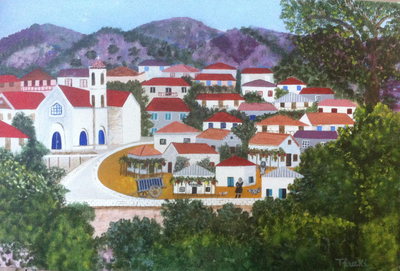 Cyprus Village
acrylic on board

Thraki Rossidou – Jones was born in Famagusta in 1920.   She eventually went to the UK to study but when World War II broke out she returned to Cyprus and enrolled in the WAAF (Women’s Auxiliary Air Force). This is also when she met her husband Keith. Thraki Rossidou Jones started painting in the mid 50’s. She developed her very own distinctive style and became one of the most well-known Naif Cypriot artists. Thraki took part in many national and international solo and group exhibitions throughout her long career. Thraki Rossidou had never stopped painting throughout her life. She died at the age of 87 in Paphos.
Gogi CHAGELISHVILI