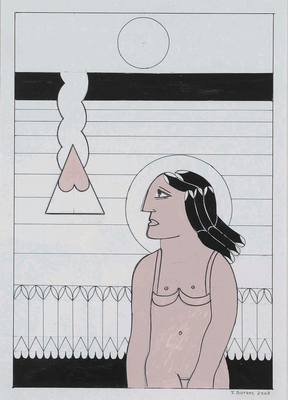 Untitled
ink and acrylic on cardboard

Stelios Votsis was born in Larnaca. He studied Fine Art in London at St. Martin’s School of Art, Sir John Cass College of Art and at the Royal Academy. In 1955 he graduated from The Slade School of Art, University College London. He lived and worked in Nicosia. On his return to Cyprus after his studies, he exhibited widely in Cyprus, Greece and internationally. Most notable being his participation in 1967 and 1971 at the Alexandria biennale, in 1968 and 1972 at the Venice biennale, in 1969 at the Sao Paolo biennale, and in 1969, 1973 and 1975 at the Ljubljana biennale. In 1973 Votsis was awarded the Ruskin prize in drawing. Votsis started with abstraction and gradually moved into representational art with works that are full of lyricism and poetry. His approach is a geometrical analysis of physical dimensions. Ηe explores the structure of matter and mind, sometimes using big areas of colour and sometimes with linear monochromatic work. His work can be seen at the collections of The State Gallery of Contemporary Cypriot Art, Central Bank of Cyprus Art Collection, The National Bank of Greece, The Commercial Bank of Greece, The Hellenic Bank Cultural Centre, The Limassol Municipal Gallery, The Archbishop Makarios III Foundation-Cultural Centre, The Vorre Museum and in a large number of public and private collections in Cyprus and abroad.
Stelios VOTSIS