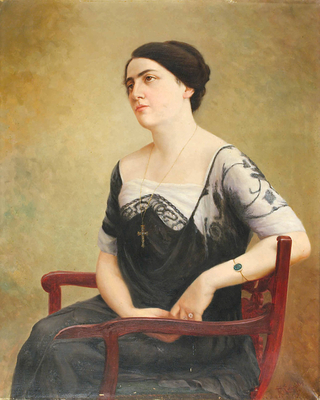 Tsirigotis was born in Corfu in 1860 and died in Cairo in 1924. He studied at The Royal Institute of Fine Art, Naples under Domenico Morelli and Vincenzo Marinelli. He continued and completed his studies in Rome. He settled firstly in Corfu, and then moved to Cairo where he taught at the Collège de la Sainte Famille, a Jesuit French school. He is generally known for his genre in portrait paintings exemplified by the present work. His subjects are mainly taken from Egyptian daily life and have a lyrical tone. In 1895 he painted the church of St. Nicholas of the Patriarchate in Cairo and in 1910 the church of St Constantine and St. Helena. He participated in several important group exhibitions such as Olympia, London in 1888 (where he was awarded a merit award), The Berlin Exhibition of 1896, Zappeio of 1898 and Cairo of 1910. His works are found in many private and public collections notably: The National Gallery, Athens, The Koutlidis Collection and The Kotsigras Collection.
Theodore PANTALEON