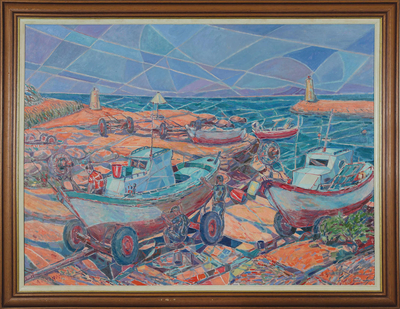 Lefteris Economou, like most artists of his generation studied art in London. He attended St. Martins School of Art (1949-1950) and Sir John Cass College of Art (1954-1955). His work has been widely exhibited in solo and group exhibitions in Cyprus, Greece, U.K. and Europe, as well as U.S.A., Canada, Australia and Japan. He has been awarded a number of prizes and distinctions: Teukros Anthias and Theodosis Pieridis award, 2000, The Republic of Cyprus awards for artistic contribution, 2002, and The Leonardo Da Vinci award, 2006. His work has been published in various important world publications. The artist paints the Cypriot landscape and the daily lives of Cypriot people with passion and virtuosity. The works marina tis Larnacas and sto mouragio are both masterpieces.
Tilemachos KANTHOS