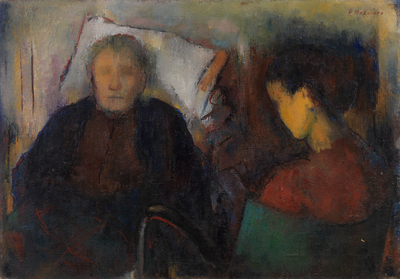 The advice
oil on canvas

Koula Bekiari was initially taught art by her mother Anna Bekiari, and later by Theofrastos Triantafyllides. She painted landscapes, still lifes and portraiture.

Her work sets human interaction in a mystic context, transforming realism into poetry. She conveys the expressionist need to submerge the human subject into a private, metaphysical and isolated world.

Being a student of Theofrastos Triantafyllidis, Koula Bekiari was highly respected by her peers and served on the board of critics for the 1957 Panhellenic Exhibition.

Reviewing the artist’s oeuvre in his book Koula Bekiari, Professor Stelios Lydakis comments on The advice: 'In Advice the mother’s image is absorbed by a misty atmosphere as if she no longer belongs to this world but to a hazy and ungraspable realm. Beside her, wrapped in her thoughts, her daughter is rendered against veils of dark colours which seem to reflect her own sombre feelings. This exquisite work, full of truth and anguish, is a 'psychogram' of strange magic that embodies all the stylistic achievements of the past'.