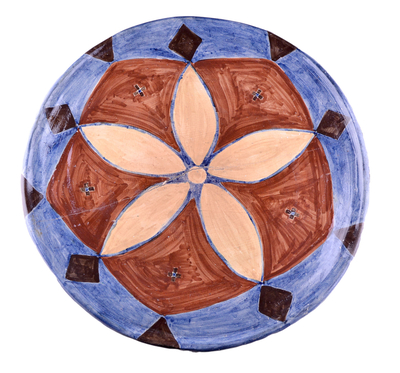 NOTES This lot is accompanied by a certificate of authenticity by his son Kyriacos Kashalos. The ceramic has been strengthened on the back with fiberglass. The line that appears across the middle is due to the firing process in the kiln. Michael Kashalos (Μιχαηλ Χρ. Κκάσιαλος) was born in Assia in 1885. As a student at the elementary school of his village, he studied icon-painting under the iconographer Kyriaco Pieridi. He became a show-maker and worked until the Second World War, and then made copies of ancient finds and the creation of decorative objects made of plaster and glass. After 1957 he was devoted to painting. In around the time of 1925 Kashalos made imitations of archaeological finds. He discovered ways of working with the most primitive tools and materials and carved stone heads of every period, Archaic, Hellenistic, Roman. To get the ancient feel for these works he used various techniques that he invented. He sprinkled the objects, for example, in vinegar and then placed them for some time in furnace ashes, burring in the soil or left exposed to the sun. Kashalos sold these works not as genuine antiquities but as copies and fakes, without any attempt to mislead. He showed his work in a number of solo exhibitions. He also took part in several group exhibitions. In 1963 at Panhellenic Exhibition and the 2nd Triennale of Naïve Art in Bratislava, in 1970 at Pancyprian Exhibition, in 1973 in the ‘Exhibition of the Artists of Famagusta’, in 1978 in ‘Three Cypriot Naïve Artists’ (Kashalos, Argyrou, Yerocostas) which took place at National Gallery of Greece and in the same year at the Municipal Museum of Munich. In 1969 he was honoured with the Bratislava 2nd Triennale of Naïve Art Award and in 1974 with the Posthumous Athens Academy Award. His work can be seen in a number of public collections such as The State Gallery of Contemporary Cypriot Art, The Cypriot Folk Art Museum, The Bank of Cyprus Cultural Centre etc.
Leon KALOGEROPOULOS