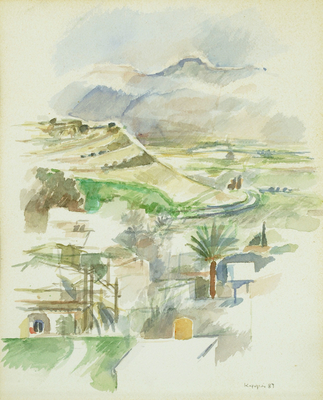 Andreas Karayan was born in Nicosia in 1943. After his graduation from the Pancyprian Gymnasium, he left for Athens and he studied medicine at Athens University from 1960 until 1967. In 1968 he went to England and studied art at Camberwell and Central Schools of Art in London. One year after he received his diploma in 1972, he took engraving lessons in Stuttgart in Germany. In 1974 he returned to London for his studied in education. He lives in Cyprus and Greece, while he is involved with art, theatre and cinema critic and icon-painting. His work has been presented in one-man exhibition in 1977 at Vitrine Gallery in Stuttgart in Germany - in 1978, 1981, 1985 and 1992 at Ora Gallery in Athens - in 1990 and 1995 Am Savignyplatz Gallery in Berlin - in 1995 at the Cultural Centre of Athens Municipality at a special exhibition dedicated on Cavafy - and in 1979-1994 in Nicosia and Limassol. Andreas Karayan has established himself as of one of the best Cypriot figurative painters, portraying everyday life centred on the male figure: his main subject matter. His compositions have a poetic feeling that is expressed through a selective colour palette and sensitive light graduation. Works such as Two soldiers are carefully balanced and executed with great skill. Andreas Karayan has presented his work in many group and solo exhibitions in Greece, Cyprus, Germany and Egypt. He also represented Cyprus at the 2001 Venice Biennale.
Kyriakos TAMANAS