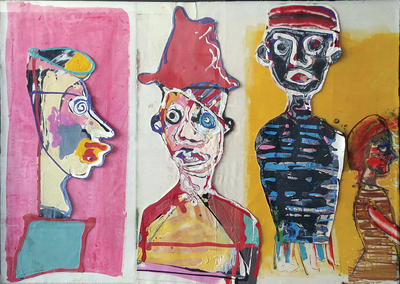 --- THIS LOT HAS BEEN WITHDRAWN BY THE SELLER ---John Kiki was born in Eptakomi, Cyprus. At the age of three, the family moved to England and settled in London. In 1960, Kiki went to Camberwell School of Art in London, working extensively from life under the direction of the likes of Frank Auerbach, Patrick Procktor and Euan Uglow. In 1964 Kiki entered The Royal Academy School, where his distinctive style first began to emerge. Abandoning working from life, he came to rely increasingly on drawings, magazine illustrations and on more expressive mediums. He paints rapidly with canvases spread out on the floor. He insists that "the subject matter doesn’t matter, there is no message". There is always the glorious paint! Kiki enjoyed early success by participating in prestigious exhibitions such as: Young Contemporaries, Tate Gallery, London, 1967; Royal Academy, London, 1972; Thackeray Gallery, London, 1973; British Painting’74, Hayward Gallery, London, 1974 and Serpentine Summer Show, Serpentine Gallery, London, 1982. In 1988, he was the subject of the BBC television documentary ‘John Kiki’, directed by Franco Rosso. His work can be found in many public and private collections all around the world, notably: The National Gallery of Wales, The Saatchi Collection, Gallup Finland Siemens PLC, Art Esprit, Ltd., University Gallery, Liverpool and Castle Museum, Norwich.
Renos LOIZOU