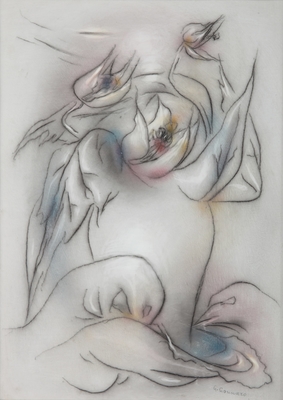 Later in 1917 he was awarded the Averoff scholarship and two years later he moved to Paris to study at Académie Julian till 1924 and later at Académie de la Grande Chaumière till 1925.

During this period his works were exhibited at the important Parisian salons. He is one of the few Greeks who had been signed to Parisian galleries, firstly with Vavin-Raspall and later with Georges Bernheim. In 1932 due to the worldwide financial crisis he returned permanently to Greece.

He progressed from a more academic approach to a more personal, surrealistic one where his subject matter, mainly: the female figure, floral themes or the male figure, dominate a dreamy atmosphere. His play on shade and light plays a central role in his work as well as his passion for poetic and symbolic ideas. A ‘cosmic painting’ as he used to call it.

Between 1937 and 1939 he worked on the fresco decoration of the Municipal Hall of Athens committee room. The project is considered one of the most impressive of its kind in Greece to this day.

His work is found in many public and private collections, notably that of: The National Gallery, Athens, The Athens Municipal Gallery, The National Bank of Greece, The Averoff Gallery and The Leventis Gallery,
Nikolaos LYTRAS