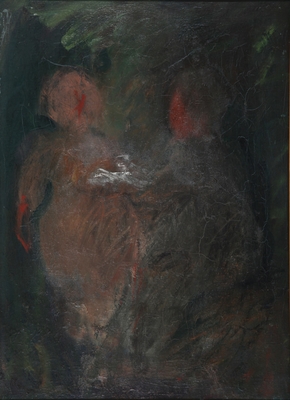 Georgios Bouzianis studied at The School of Fine Arts, Athens and graduated in 1906, under Nikiforos Lytras, Constantinos Volanakis and George Roilos. He studied alongside Giorgio de Chirico.

The year of his graduation on a scholarship, he moved to Munich to study at The Royal Academy of Fine Arts at the studio of O. Seitz. He additionally studied with W. Thor and G. Schildknecht.

The period between 1920 and 1929 is one of the artist’s most productive times. From 1918 to 1921 he exhibited at the Rithaler gallery and from 1926 to 1930 at Thanhauser gallery, both in Munich. From around 1925 he also exhibited at Heinrich Barchfeld gallery in Leipzig.

His first important exhibition of this period was in 1927 at the Kunsthutte in Chemnitz (Karl-Marx Stadt) and the following year he participated at the ‘New Sezession’ in Munich. During this period his work fully entered expressionism and he received overwhelmingly positive reviews from the critics in Germany.

In 1929 gallery owner H. Barchfeld covered Bouzianis' costs for him and his family to move to Paris in exchange for works by the artist. His Paris period was very productive, where his new environment gave him fresh stimulation influencing the progression of his work. During this time Bouzianis created works mainly in watercolor and pencil. Bouzianis described his time in Paris as his 'fluid period'.

When Bouzianis returned to Germany the Nazis came to power and artistic freedom was repressed, he therefore decided to return to Athens. However, back in his home country Bouzianis was unknown and after his twenty seven year absence abroad, Greece no longer suited him.

In 1956 he was awarded The Guggenheim prize.