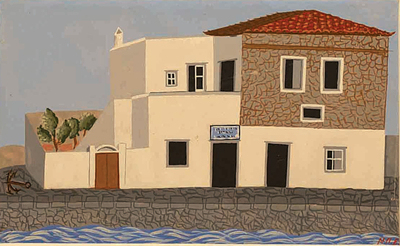 NOTE This work was created for the Hellenic Arts Association (founded in 1930, promoting Greek traditional arts). Tsarouchis, Kontoglou and Diamantopoulos were also participants, whose works depicted buildings and costumes from all over Greece. These works were compiled in the company's album from 1936-48. Nikos Engonopoulos born in Athens in 1907. During the summer of 1914 when Nikos Engonopoulos' family went on a trip to Constantinople. Due to the outbreak of the First World War whilst they were in Constantinople, his family were obliged to remain and settle there.   In 1923, he is enrolled as a boarder in a Lyceum in Paris, where he studied for four years. He returns to Greece in 1927 where he is first enlisted in the 1st Infantry Battalion until 1928. After that he works as a translator at a bank and as a secretary at the University for 2 years. Then from 1930 to 1933 he works is as a designer in the Urban Planning Department of the Ministry of Public Works.   In 1932 he enrolls at The School of Fine Arts, Athens, where he studies under Konstantinos Parthenis. He also attends classes at the art studio of Fotis Kontoglou. During that time, he met the poet Andreas Embirikos and important artists such as Yannis Tsarouchis, Giorgio de Chirico and Yannis Moralis. His first paintings, mostly temperas on paper, were presented at the ’Art of Modern Greek Tradition’ exhibition, in January 1938. In 1939 his first collection of poems (Do Not Distract the Driver) were published, followed by a second collection the following year (The Clavicembalos of Silence).   Professor, painter, set designer and poet. Nikos Engonopoulos was one of the major representatives of the generation of the 30s and one of the main representatives of the surrealist movement in Greece. His work also includes translations, essays, and critical studies. He took part in numerous solo and group exhibitions; he published many poem collections and there have been many books written about him. His work can be found at several museums in Greece and abroad and in many prominent private collections.
Nikolaus GYSIS

HOUSES OF ZAGORAS
Scroll to top