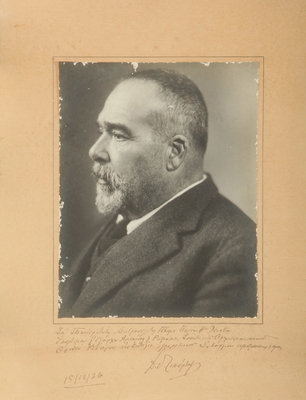 Dimitris Lipertis was born in Larnaca in 1866. He studied languages in Beirut at The American University and at the Jesuit Université Saint-Joseph, from 1880 to1884, specialising in English and French. In the decade that followed he worked in various government departments such as, as a payroll officer in the public works department, as an inspector of vineyard diseases, as a coastguard official etc. Through these jobs he formed a relationship with the Cypriot countryside and with native Cypriots, whilst also getting to know various dialects spoken in different parts of the island. In 1900 he left Cyprus for Naples where he studied philosophy. He then went to Athens to study theology. On his return he began working as a teacher in the capital, Nicosia. Between 1910 to 1912 he worked at The Pancyprian Gymnasium as a French teacher and then at The English School. He also served as the first headmaster of The Mitsis Commercial Academy in the village of Lemythou. Dimitris Lipertis is considered to be one of the most prominent modern Cypriot poets. Leontios was in charge of the Pafos Metropolitan District, as a religious leader. When the British Colonial Administration deported all the other Bishops of Cyprus as anti-colonial event promoters, he became surrogate of the Archiepiscopal Throne. However the political situation on the island postponed the elections. Eventually in 1947 he was elected Archbishop of Cyprus, only to die unexpectedly a few days after his election.
John KIKI