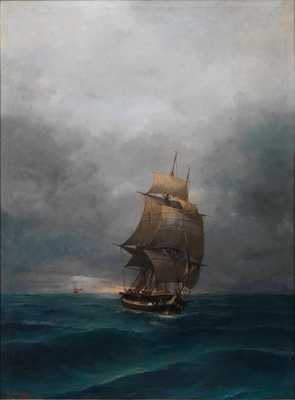 
private collection, Athens
This work is accompanied by an authenticity report from Stavros Mbaltoyannis

Constantinos Volanakis was born on the island of Crete in 1837. In 1865 he moved to Munich to study at The Royal Academy of Fine Arts. He was taught by Karl von Piloty. His main interest from early on was in seascapes. He studied 17th century Dutch Masters and Italian ‘Vedutta’ masters A. Canaletto and F. Guardi. In 1868 he presented ‘The battle of Lissa’ at the Austrian Artists' Society. The work was based on an incident during the war between the Austrians and the Italians. The painting was greatly admired and was acquired by Emperor Franz Josef I of Austria. In 1877 he exhibited ‘The battle of Trafalgar’ in London, the work was bought by the British Naval Ministry . In 1883 he returned to Greece due to his wife’s health problems caused by the cold climate of Munich. On his return to Athens Volanakis became a professor at The Athens School of Fine Arts. Volanakis is regarded as a great nineteenth century marine painter because of his masterful representation of ships, detailed recordings of naval battles and sensitive atmospheric renderings. At the beginning of the Greek war of independence, Greek naval forces consisted primarily of the merchant fleet from the Saronic islands of Hydra, Spetses and Poros, and also Psara and Samos. The fleet was of crucial importance to the success of the revolt. Its goal was to prevent the Ottoman Navy, as much as possible, from resupplying the isolated Ottoman garrisons and land reinforcements from the Ottoman Empire's Asian provinces. Although Greek crews were experienced seamen, the light Greek ships of mostly armed merchantmen, were unable to stand up to the large Turkish ships in the line of direct combat. So the Greeks conducted the equivalent of modern day naval special operations, resorting to the use of fireships (Greek: πυρπολικά or μπουρλότα), with great success. It was through the use of such ships that courageous seamen like Constantine Kanaris succeeded. Under the leadership of capable admirals, most prominently Andreas Miaoulis of Hydra, the Greek fleet achieved early victories, securing the survival of the revolt in the mainland. The 350-ton Aris was constructed as a merchant vessel in Venice in 1807. Upon the start of the Greek Revolution in March 1821, her owner, Anastasios Tsamados (1774-1825) from Hydra, armed the ship with sixteen 12-pounder guns and joined the fleet of his home island. Aris participated in many of the early naval clashes with the Ottoman Navy, but became famous after the action fought at Navarino on the 8th of May 1825, which became known as the ‘Sortie of Aris’ (Έξοδος του Άρεως). After the end of the War of Independence the Greek Government acquired Aris so it would be used as a training vessel for the new Royal Hellenic Navy.
ilias LALAOUNIS brooch