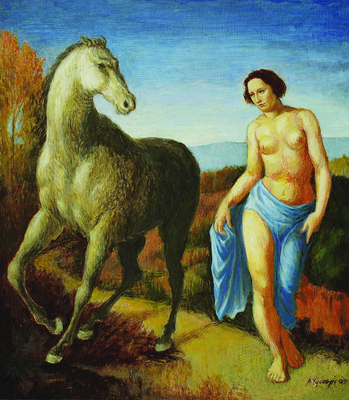 Woman and horse
acrylic on canvas

Andreas Chrysochos was born in Milia of Famagusta in 1929. He graduated from the College of Morphou in 1950. During the years 1952 to 1954 and 1957 to 1959 he studied painting at Goldsmith’s College, School of Art of the University of London. He also studied psychology of children’s art at N.E. London Polytechnic from 1974 to 1976. He worked as a teacher, art professor at the Pedagogical Academy and as an Art Inspector. He writes art critiques, and he is involved in icon-painting and calligraphy. He has participated in many group exhibitions: in 1961 at Vayianso Gallery in Athens - in 1965 in Cairo - in 1967 in Boston U.S.A and at the 7th Panhellenic Exhibition in Athens - in 1968 at the 7th Biennale of Alexandria, the 1st Indian Triennale and the 34th Venice Biennale - in 1970 at the Commonwealth Institute in London and Edinburgh - in 1979 at the “Contemporary Cypriot Painting” exhibition in Thessaloniki - in 1981-1982 at the Touring Exhibition of Contemporary Cypriot Painting in Budapest, Prague, Bucharest, Belgrade and Sofia and in 1983 at the “Contemporary Cypriot Painting” exhibition in Paris. In 1950 he was honoured with the First International Watercolour Award in London, in 1963 he received the honorary medal in Alexandria and in 1968 he was honoured with the Grand Prix Europẻen des Arts et des Lettres in Nice.
Alexandros ALEXANDRAKIS